Super Bowl LIII MVP Julian Edelman of the New England Patriots dropped by The Ellen Show to chat about winning this year’s big game, but Ellen clearly had one thing on her mind.

After walking out with the Vince Lombardi Trophy in hand (and that glorious beard on his face), Ellen asks if each player gets a trophy. The answer is ‘no,’ but Edelman does share you can buy one – from Tiffany’s!

After presenting him with the MVP award, Ellen does explain since it’s his first time on the show that there’s a tradition that a shirtless pic has to be shown (!!!). 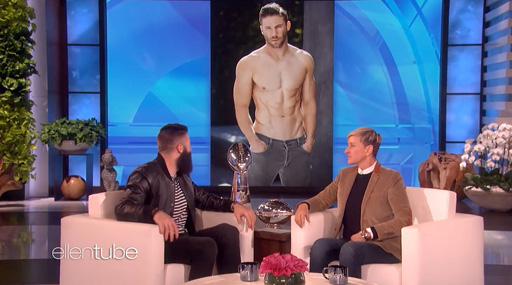 Another pic – and jostling Julian is naked in it! This one from his photo shoot for the 2017 ESPN Magazine Body Issue.

When did TV talk shows get to be so much fun? 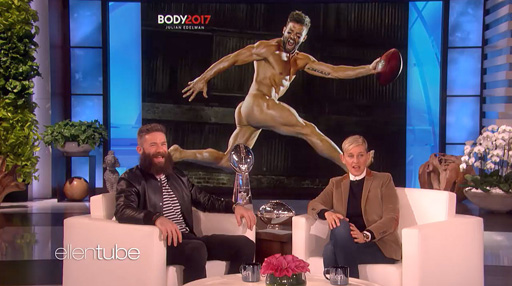 Ellen notes the technical merits of the photo asking, “How’d you do that? What’s happening there? I mean, you just jumped in the air and they took that picture?”

“You know… it was a crazy day,” offers Edelman. “The temperature was just right, though, that was a good thing,” he adds with a smile.

After pointing out his obviously muscular legs, Ellen shifts her attention to Edelman’s arms and how you can’t miss them, even asking, “Do you wear shorter sleeves than the other guys?”

Edelman explains something about ‘being tight,’ and less surface area, and ‘putting hands on him,’ but it was lost on me as I was still looking at his biceps, so, oops. 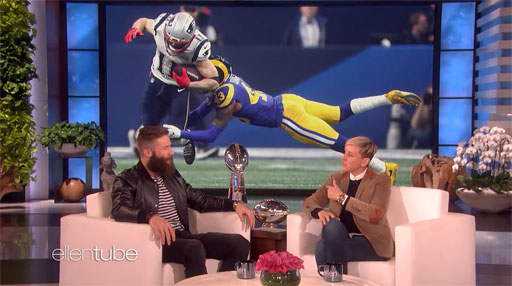 He adds it takes two guys to put the jersey on him before a game. “And afterwards, it’s like the worst thing ever… getting it off.”

“Getting it off?” inquires Ellen.

“Yeah, getting it off….” affirms the wide receiver.

“Cause it’s so tight and sweaty?”

“Without a doubt,” confirms Edelman.

I might have lost consciousness there for a second, anyway…

Ellen finally gets to what’s really been on her mind as she addresses Edelman’s big, bushy beard. #swoon

Asked if he’s shaved at all since the football season began months ago, Edelman explains, “(Patriots) Coach Belichick says ‘Put everything in the drawer, and worry about it ’til the season’s done.’ So I put my razor in the drawer.”

Noting that the 32-year-old wide receiver is a fan of The Boys & Girls Club of America, our intrepid host finally gets down to business offering him $10,000 for the charity if he’ll allow her to shave his beard.

Wait, whaaaat? The beard is going away…??? But, but… #stunnedblankface 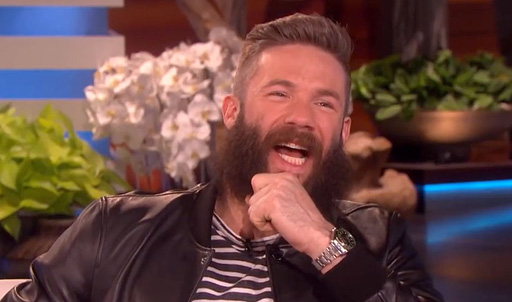 Edelman grabs his whiskers (as if to protect them) as he ponders the offer. “It’s like a child that grows on you…,” he says.

But he’s up for it, and even offers to kick in his own $10K for the Boys & Girls Club. So, off to the barber’s chair they go.

Before they get started Edelman does inquire as to whether Ellen knows how to trim a beard, and she helpfully offers that she’s used clippers on her dog.

Ellen gets going with the clippers and you can see some apprehension in Edelman’s face. But he’s a tough guy, he’ll get through.

Halfway through Ellen checks to see if “there’s anything else” he’d like trimmed?

“Are we talking a Brazilian?,” says Edelman laughing. 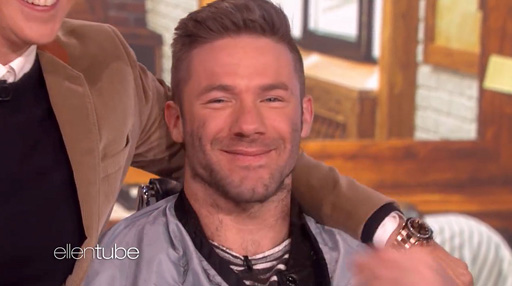 You know, that is a handsome face.

And all for a good cause! Happy Friday! 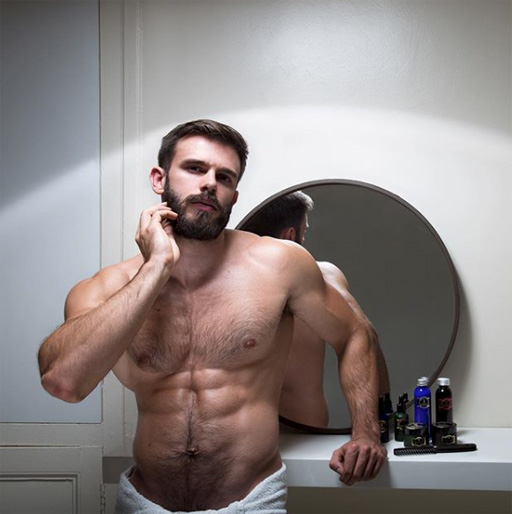 Now, I may need to go excuse myself for a minute… #Dang