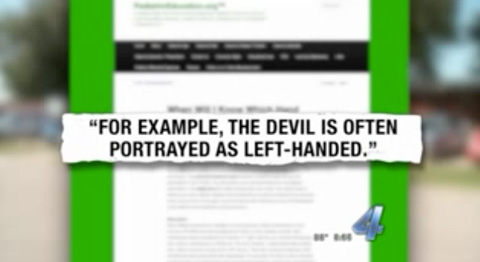 An Oklahoma teacher allegedly told a pre-K student to stop being left-handed because it’s “sinister” and the devil is left-handed.

From News Channel4 in Oklahoma:

Zayde, like most kids in Pre-K, is learning how to read and write. And like his mom, Alisha, Zayde is a lefty. “From picking things up to throwing things, to batting, to writing, to just coloring you’d do at home with him, he’s always, always used his left hand,” Alisha Sands said.

That was until last week at homework time. Alisha asked him why he was writing with his right hand, not his left. “I just asked ‘Is there anything his teachers ever asked about his hands?’ And he raises this one and says this one’s bad,” Sands said.

Alisha sent the teacher a note and got a strong response. It was an article calling left-handedness “unlucky,” “evil,” and “sinister.” It even says “for example, the devil is often portrayed as left-handed.” Alisha couldn’t believe it. “It breaks my heart for him because someone actually believes that, believes my child is evil because he’s left handed, it’s crazy,” Sands said.

What the hell? I have many friends who are great teachers – I can’t imagine any of them coming up with this nonsense.