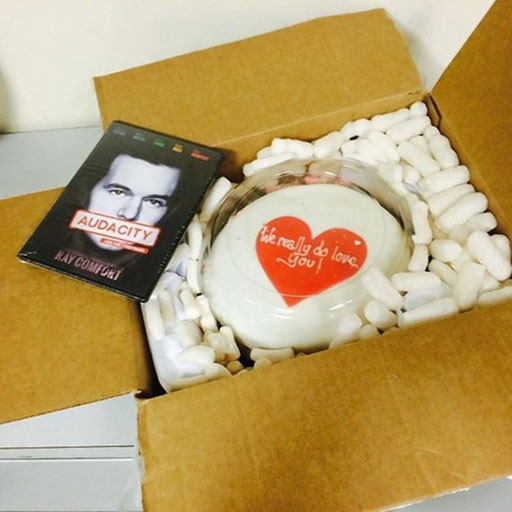 Melissa and Aaron Klein, the former owners of Sweet Cakes by Melissa, stepped back into the spotlight this week when they sent what appeared to be “apology” packages to 10 LGBT groups comprised of a cake with the message “We Really Do Love You!” and a copy of the anti-gay movie Audacity.

You’ll recall the Kleins refused to bake a wedding cake for a same-sex wedding and ended up being fined $135K for violating Oregon’s public accommodation laws. They eventually closed their bakery when the story became public and sales dried up.

Melissa Klein gave this statement to the Oregonian about the “apology” packages:

“Our purpose is to express our love for them as a Christian.

“We don’t hate them. We also included in the package the movie Audacity. I feel it is a well done movie that shows what being a Christian is about. My hope is that they will watch it and maybe just understand our heart. We want to show them that it’s not about not serving them it’s about not being able to partake in an event.”

According to Comfort, “We are like doctors with a cure for cancer.”

San Diego’s Canvass for a Cause was one of ten LGBT organizations to receive a cake, but the group decided to place the package on auction via eBay.

“This is not an ’I am sorry cake,’” says Cavass director Cathy Carmack. “There is no apology included with the cake because the Kleins are not sorry. ”