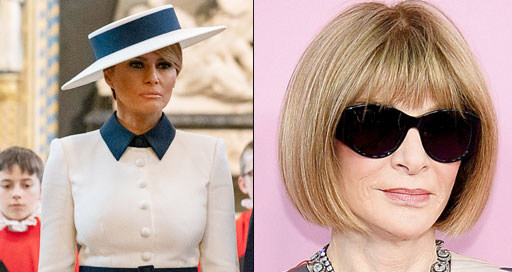 In an interview with Anne McElvoy for The Economist’s podcast, legendary fashion guru and editor-in-chief for Vogue Magazine, Anna Wintour, threw serious shade at First Lady Melania Trump in the most finessed manner you can imagine.

Sometimes, not saying anything at all is the purest form of shade.

In a discussion about Donald and Melania Trump’s sense of fashion, McElvoy notes the Donald’s often “ill-fitting suits and strange trousers and red baseball caps,” but then pivoted to Melania.

“Melania is much more put together,” said McElvoy. “She did come to the UK and I think very consciously wanted to see herself as an ambassador for British fashion in this case, or a transatlantic ambassador. Do you value that?”

“Well,” began Wintour, “I think First Lady Michelle Obama was really so incredible in every decision she made about fashion. She supported young American designers. She supported designers, indeed, from all over the world. She was the best ambassador this country could possibly have, in many ways, obviously way beyond fashion…”

And at that point McElvoy interrupted to bring the discussion back to Melania. “But she’s not the First Lady now – what about the one you have now?”

“…beyond fashion, and for me, she is the example I admire,” continued Wintour, putting a period on her thoughts.

Earlier in the chat McElvoy noted that the Trumps don’t seem to make the pages of Vogue Magazine, and the journalist wondered if that might be “a conscious decision?”

Wintour responded, “There’s so many women in politics that deserve celebration, whether it’s Kirsten (Gillibrand) or Senator Harris, or Senator Warren.”

See what she did there?

“We just recently ran a piece in our current issue about five of the six political female candidates, all of which I felt deserved a place in Vogue,” she continued. “And how wonderful that after a lot of naysayers saying that after (Hillary Clinton) not succeeding that it would be very difficult to find a voice in the current presidential campaigns. How wonderful that that is not the case.”

“I think that both Senator Warren and Senator Harris are among the top candidates right now,” added the woman who provided the inspiration for Meryl Streep’s ‘Miranda Priestly’ in The Devil Wears Prada.

Realizing her question had been sidelined, McElvoy circled back a few minutes later.

“We just glided, or perhaps it’s clear, I don’t know, past the question of Melania and where she features in Vogue world,” said McElvoy. “Do you feel that she’s not the right person to feature in the magazine?”

“I think it’s important for Vogue to support women who are leading change in this country,” answered Wintour.

The fact that she tried to correct Anna Wintour pic.twitter.com/p8qTYryFFp

anna wintour allowing you to finish your question for her to continue to disregard it is an energy I would like to exhibit.

Anna Wintour after she was finished that radio interview… 🤣 #IsaidWhatisaid pic.twitter.com/IFdBnJN4Ia 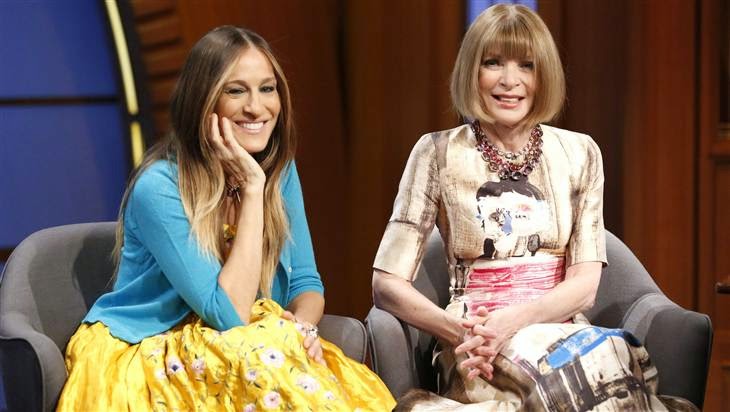 Normally, it’s the women’s attire which gets the critique at big gala events.

But Sarah Jessica Parker and Anna Wintour, editor-in-chief of Vogue, stop by Late Night with Seth Meyers to discuss which male celebrities did and did not adhere to the “White Tie” dress code of this year’s Met Gala.

A few of the comments:

• Tom Brady: “He obviously did not look at the invitation.”

• Hugh Jackman: “My understanding is this is called ‘White Tropical Dinner Jacket.’”

• Bradley Cooper: “If you read your Emily Post — which I know you do, Seth — his studs are onyx and they should’ve been mother of pearl.”

Watch the clip below, and read more at OUT.