Former (and famous) Green Bay Packer Leroy Butler has lost out on an $8,500 speaking gig for praising Jason Collins on Twitter.

A church in Wisconsin pulled the plug on the contracted gig after noticing Butler congratulated Jason Collins for coming out of the closet, citing a morality clause.

Here’s how he responded (read bottom to top): 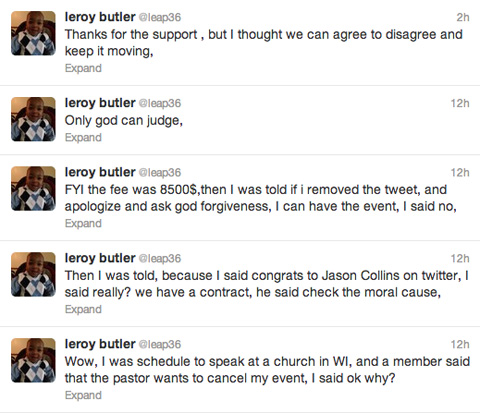 “Wow, I was scheduled to speak at a church in WI, and a member said that the pastor wants to cancel my event. I said ok why? Then I was told, because I said congrats to Jason Collins on Twitter,” Butler wrote. “I said really? we have a contract, he said check the moral cause, FYI the fee was $8,500, then I was told if I removed the tweet, and apologize and ask god forgiveness, I can have the event. I said no, only god can judge.”