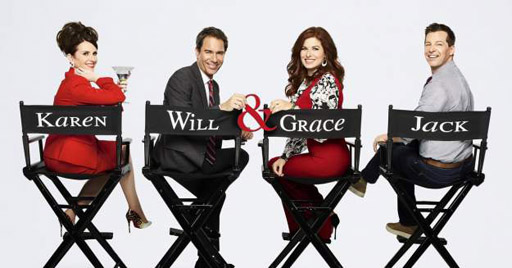 NBC announced during the Paley Center for Media’s Paleyfest in Los Angeles on Saturday that Eric McCormack, Debra Messing, Megan Mullally and Sean Hayes will be back for a third new season of Will & Grace.

Additionally, the second season episode order for the reboot of the hit series has been upped from 13 episodes to 18.

“As far as I’m concerned, we can’t get enough of ‘Will & Grace’ and 23 more episodes is music to my ears,” NBC Entertainment chairman Robert Greenblatt said in a statement. “We’re eternally grateful that Debra, Eric, Sean and Megan feel the same way and wanted to keep this good thing going. I’m overwhelmed by the euphoric response the new show has received from the press and the audience, and my hat is off to the unrivaled writing team of Max Mutchnick and David Kohan, as well as the brilliant directing of Jimmy Burrows, for consistently delivering one of the best shows on television.”

Taking into account the series’ original run of 8 seasons, this would now bring the sitcom to a total of 11 seasons.

And to think it all started with a surprise 10-minute election-themed mini-episode in fall 2016.