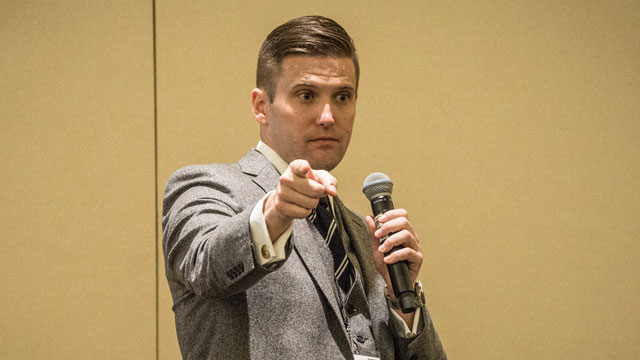 Over the weekend, alt-right instigator Milo Yiannopolous posted an audio recording of ‘white nationalist’ Richard Spencer reacting to the death of 32-year-old Heather Meyer after the violent ‘Unite The Right’ hate rally in Charlottesville, North Carolina, in 2017.

Spencer was an organizer of the event where one of his compatriots drove his car into a crowd of anti-nazi protesters killing Meyer. He made his way into the mainstream news by being ‘clean-cut’ and ‘well-dressed’ as opposed to appearing in his white hood.

Spencer says, in response to Heyer being murdered in Charlottesville:

We are coming back here like a hundred fucking times. I am so mad. I am so mad at these fucking people. They don’t do this to fucking me. We’re going to ritualistically humiliate them. I am coming back here every fucking weekend if I have to. Like this is never over! I win! They fucking lose! That’s how the world fucking works.

The word octaroon, a hateful term for someone who is one-eighth black, is practically never used except in so-called ‘white nationalist’ circles.

You’ll recall Donald Trump infamously defended people like Spencer declaring that there were “very fine people on both sides” at the rally.

It’s interesting that Milo would leak the recording since it seemed he and Spencer were once friendly. With Milo’s financial woes hitting the news, perhaps he’s just trying to become relevant in some way…?

Here’s the audio – get ready, folks, this is rough:

The YouTube post by Yiannopolous claims “the audio was recorded in Charlottesville at an ’emergency meeting’ Spencer assembled immediately after he learned of Heather Heyer’s death.”

For a little more background on Spencer, here’s a deeper dive ABC News’ Nightline did in 2016. Featured in the report is a clip where Spencer led cheers for Donald Trump declaring, “Hail Trump!” as his followers threw Nazi salutes.