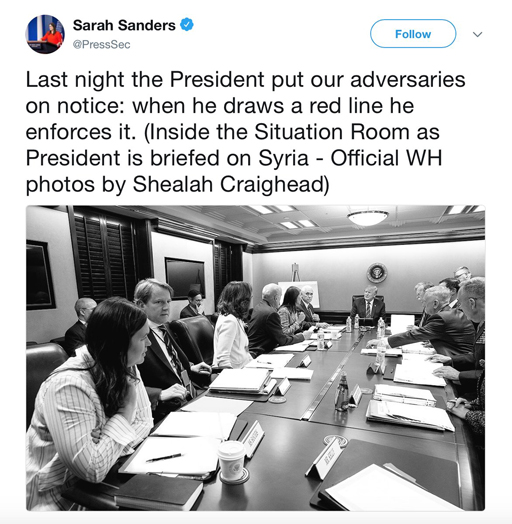 White House Press Secretary tweeted out the above message and photo in an attempt to show Donald Trump in a strong, military moment.

Unfortunately, her tweet was misleading because Vice President Mike Pence (pictured on Trump’s right in the photo) was in Peru at the time of the Syria bombings.

What she really wanted was a “bin Laden war room pic,” but the reality is there isn’t one.

So she tried to fudge it hoping folks wouldn’t notice.

Fun fact: This picture is NOT from last night as Mike Pence is mysteriously in the room while also out of the country.

There is NOTHING @PressSec won’t lie about. https://t.co/k2YBVBFdHv

Pence is in this photo.
Pence was in Peru.
Nothing @PressSec says or posts is true.
Ever.
And we pay her salary. https://t.co/iFvbRcpGCP