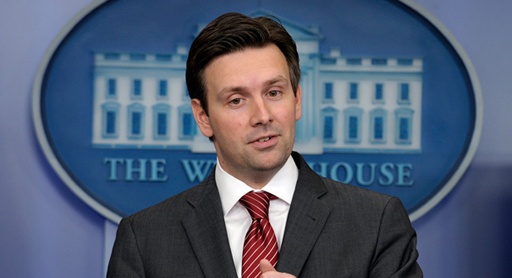 White House spokesman Josh Earnest was asked about the Melania Trump speech debacle at today’s White House press briefing and he had this to say:

“Obviously in 2008, Mrs. Obama spoke movingly in her own words about her life story, her values,” White House press secretary Josh Earnest told reporters. “I’m confident that in the future, aspiring first ladies or potential first husbands would draw on the same kinds of sentiments to advocate for their spouse.”

He added that the fact that Melania Trump received “such a strong review of her speech based on reflection of the same kinds of values that were included in Mrs. Obama’s speech … is an indication that the country’s got a lot of common ground, even in spite of the political divisions that are on display at the convention.”

Classy way to handle it.