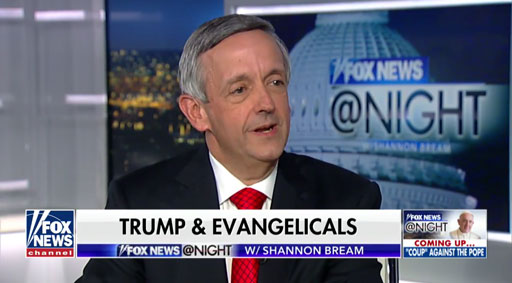 Last night’s event at the White House was grand enough to rival past ’state dinners’ held for visiting heads of state as President Trump and Vice President Mike Pence welcomed a ‘who’s who’ of evangelical, anti-LGBTQ leaders.

That said, Donald Trump’s White House crew were all on hand to happily take pics with the leaders of Trump’s evangelical base, including supposedly LGBTQ-friendly Jared and Ivanka Trump.

At White House Dinner tonite. Fabulous event. I was leaving the room. Did not even know the President was coming up beside me on my right. Was so shocked to see him. Got the best pic I could. pic.twitter.com/MceUWAvcp0

Many Americans have not been able to understand how so-called “Christians” can reconcile so many less-than-moral incidents in Trump’s past and present.

The reason why? They don’t care about his moral failings as long as they get the policies they want.

On Fox News last night, Jeffress explained to host Shannon Bream that as long as Trump delivers on the policies he and his ilk want to see passed, they will not be ‘shamed’ for supporting the Trumpster.

“I know a lot of people are still perplexed ‘Why are Christians so supportive of Donald Trump?’” Jeffress said. “Well, it’s really not that hard to figure out when you realize he is the most pro-life, pro-religious liberty, pro-conservative judiciary in history and that includes either Bush or Ronald Reagan. I think that is why evangelicals remain committed to this president and they are not going to turn away from him soon.”

“To be fair, Shannon, we have to understand these are still allegations against the president, so I’m not going to judge the president on these things,” said the megachurch pastor. “But even if they were true, some of these allegations, I mean, obviously, we don’t support extramarital affairs, we don’t support hush money payments, but what we do support are these president’s excellent policies,” Jeffress continued. “And I think most thinking people can absolutely differentiate between the two.”

“And don’t be mistaking what is going on here. Those who hate President Trump, those on the left know that if they can dislodge his evangelical supporters from him, they have a shot at overtaking the White House. So I think the left is trying to shame people like myself continuously for supporting this great president. It’s not going to work. We’re not going to turn away from him.”

Watch Jeffress explain why he and fellow “Christians” won’t be ‘shamed” by Donald Trump’s deeds below.