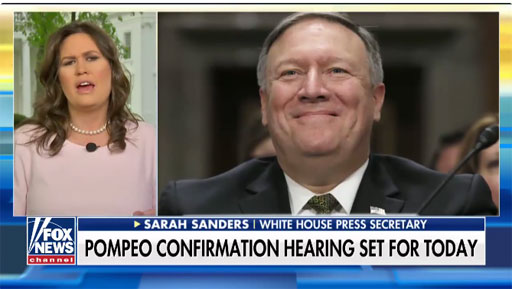 As CIA Director Mike Pompeo’s chances of being confirmed as the new Secretary of State get dimmer and dimmer, White House Press Secretary Sarah Huckabee Sanders decried Senate Democrats’ lack of support for the nominee.

Sarah Huckabee Sanders, appearing this morning on Fox News, called out Senate Democrats for “hating” the Donald more than they love their country.

“Look, at some point, Democrats have to decide whether they love this country more than they hate this president. And they have to decide that they want to put the safety and the security and the diplomacy of our country ahead of their own political games. And we’re very hopeful that they will. Mike Pompeo is a highly qualified individual, top of his class at Harvard, first in his class at West Point. He’s been an impeccable CIA director.”

Do none of these people remember Republicans blocked President Obama at every turn???

Hard to believe Obstructionists May vote against Mike Pompeo for Secretary of State. The Dems will not approve hundreds of good people, including the Ambassador to Germany. They are maxing out the time on approval process for all, never happened before. Need more Republicans!

.@PressSec: Democrats need to put the safety, security, and diplomacy of this country ahead of their hatred for the president and elect Pompeo as Secy of State pic.twitter.com/KCXTCl0es7

As Trump accuses Democrats of obstructing Mike Pompeo’s confirmation, keep in mind that it only takes a majority vote in the Senate in order for Mike Pompeo to be confirmed. The Republicans have a majority, meaning it is impossible for Democrats to obstruct his confirmation.

John Kerry: 94-3
Hillary Clinton: 94-2
Condi Rice: 85-13
Colin Powell: Unanimous Voice Vote
What does history tell us? Members of both parties have long believed that U.S. national security is too important to play politics with Secretary of State nominees.#ConfirmPompeo

.@PressSec asks: “What does history tell us?”

• McConnell will force a Senate vote, last done for any rejected cabinet nominee 73 years ago.

History is telling you to take a hint. https://t.co/yD2OqPRsiy