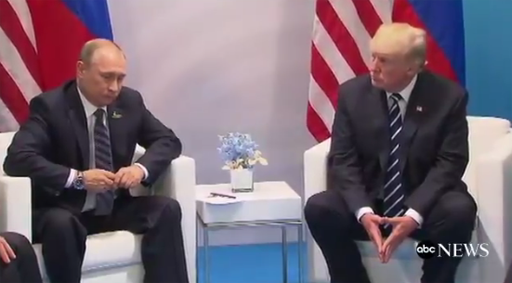 As you may recall, Trump has given conflicting answers in the past as to whether or not he has met or have any relationship with Putin.

Reminder: Trump has changed his story many times about whether or not he’s had a relationship with Putin. Watch. https://t.co/AdT8V6n6SO

At a low-key meeting at the G20 summit in Hamburg, Germany, Trump said, “Putin and I have been discussing various things, and I think it’s going very well.”

Via translator, Putin acknowledged that while the two leaders had previously spoken by phone, “I am delighted to meet you personally,” Putin said.

Putin looks “delighted” to be there, doesn’t he?

And by the way…

This photo already everywhere in Russian media (as was a similar one with Obama). Putin knows how to play this game. Trump reaching to him. pic.twitter.com/3Hn4DQUpLy