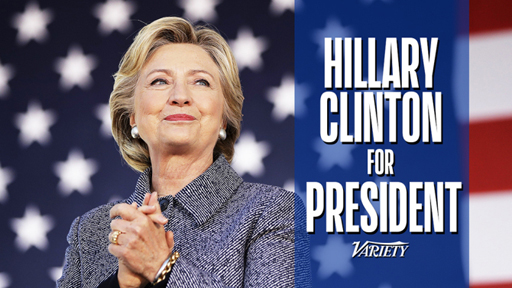 Never. In 111 years of publication.

For the first time in its 111-year history, Variety is endorsing a presidential candidate — Hillary Clinton. While it is commonplace for mass-market newspapers like The New York Times and The Washington Post to endorse candidates, that’s not the case for trade publications. But this year, the editors-in-chief and our publisher, Michelle Sobrino-Stearns, feel strongly that we should buck tradition and take a public stance on this historic election; for the same reason that The Atlantic endorsed Clinton (marking only the third time since its 1857 founding to back a candidate), we didn’t want to sit on the sidelines and come down on the wrong side of history.

There are a number of other motivating factors behind our decision. We believe that Clinton is not only the best candidate for the job, but the only candidate. As many endorsements have noted, she has the experience and temperament necessary to make a truly effective president. In fact, it’s hard to think of any presidential candidate with the depth of knowledge and public-service record she has.

Clinton has been spent her entire life as a social-justice activist, fighting for the rights of women, children, families, the disabled, farmers, veterans, and the LGBTQ community. She has taken on such crucial issues as climate change, racial injustice, and the epidemic of gun violence. She’s not “nasty” — she’s tough and unafraid to smash barriers, whether it was negotiating strict sanctions against Iran, or brokering a ceasefire between Israel and Hamas. She’s a global diplomat who has traveled extensively to forge ties with foreign leaders.

We are proud to endorse Hillary Clinton as president and put an end to a prolonged election circus dominated by an egomaniacal ringmaster. Through it all, she has remained dignified and focused on the issues. We believe she will lead America forward with great vigor and success.