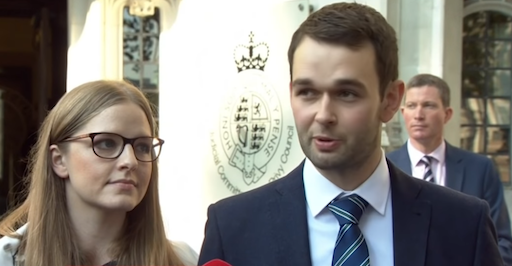 In 2014, the Northern Ireland Equality Commission brought a lawsuit against Ashers Baking Company on behalf of LGBTQ activist Gareth Lee who had gone to the bakery to order a cake for a private function to be held observing International Day Against Homophobia.

But Amy McArthur later contacted the man who ordered it and said they could not make such a cake “in conscience.”

The McArthurs have maintained that the issue was not the customer but the message.

The BBC reports that back in May, Daniel McArthur told the press while standing in front of the court house, “We didn’t say no because of the customer; we’d served him before, we’d serve him again. It was because of the message. But some people want the law to make us support something with which we disagree.”

After two earlier court cases, the UK Supreme Court has now ruled in the bakers’ favor overturning a £500 damages award imposed on the bakery owners.

The five justices of the high court were unanimous in their ruling seeing the issue as not one of gay discrimination but one of freedom of expression.

“It is deeply humiliating, and an affront to human dignity, to deny someone a service because of that person’s race, gender, disability, sexual orientation or any of the other protected personal characteristics,” Hale said in the judgment.

“But that is not what happened in this case and it does the project of equal treatment no favours to seek to extend it beyond its proper scope.”

Freedom of expression, as guaranteed by article 10 of the European convention on human rights, includes the right “not to express an opinion which one does not hold”, Hale added. “This court has held that nobody should be forced to have or express a political opinion in which he does not believe,” she said.

The McArthurs expressed relief for the ruling, saying, “We are very grateful to the judges. We did not turn down this order because of the person who made it, but because of the message itself.”

Lee, however, says he feels “confused about what this actually means.”

“We need certainty when you go to a business,” he told The Guardian. “I’m concerned that this has implications for myself and for every single person.”

The original decision to turn down his order had left him feeling like a “second-class citizen”, he said.

Lee’s last option would be to appeal to the European court of human rights in Strasbourg.

It’s worth noting that Northern Ireland is the only place in the UK where same-sex marriage is not legal.

If this sounds familiar, it should.

Earlier this year, the U.S. Supreme Court narrowly ruled in favor of Jack Phillips, owner of the Masterpiece Cakeshop in Colorado, who refused to sell a cake to a gay couple celebrating their wedding.

In the U.S. case, the high court decided that a Colorado state agency had approached the case with religious bias. In the ruling, SCOTUS asked the Colorado Civil Rights Commission to re-examine the case.