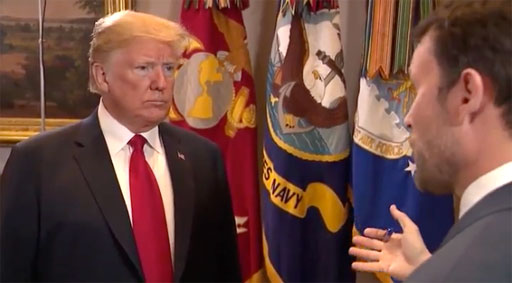 Facing a strong possibility of a Democratic takeover of the House, Donald Trump has suddenly had a change of heart regarding the “tone” of his first two years in office.

Speaking to a reporter for right-leaning Sinclair Broadcast Group, Trump was asked if he had any regrets from his first two years.

“I would like to have a much softer tone. I feel to a certain extent I have no choice, but maybe I do. Maybe I could have been softer from that standpoint, but I want to get things done.”

“I’m not sure that if I did that maybe I’d be swamped, meaning swamped by the other side because their tone hasn’t been so nice either,” he added.

“But that will be something that I’ll say I’ll be working on.”

“I would love to get along, and I think after the election a lot of things can happen. But right now they are in their mode, and we are in our mode. And you know if you’re criticized you have to hit back, or you should,” Trump said.

This mea culpa comes as White House staffers prepare for what could possibly be an onslaught of investigations launched by a Dem-controlled House.

This the laugh of the day so far —> Trump says he regrets the tone he used during first 2 years in office https://t.co/BDvI6kv2iL