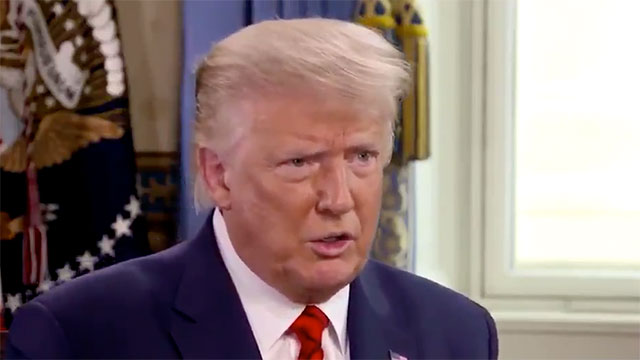 New York Times reporter Michael Schmidt reports in his new book that Vice President Mike Pence was put on standby in November 2019 when the president was rushed on a Saturday afternoon to the military hospital, which the White House later explained as routine testing, but others have speculated was more serious.

Schmidt’s book claims Pence was placed on standby if the president had to undergo a medical procedure that would require anesthesia, although he didn’t specify the sourcing of that claim.

In other Trump news, folks were gagging as Trump told Fox News host Laura Ingraham last night that there are people in black uniforms on planes controlling the streets and compared police officers who shoot civilians to a golfer who ‘chokes’ on a three-foot putt.

Watch the clips below and make up your own mind.

The new book that Trump is alluding to does not in fact say that Trump suffered from “mini-strokes.” https://t.co/M45B9TMnKd

Then release your medical records to the American people, who deserve to know the exact condition of the President of the United States.

Trump is claiming an airplane full of “thugs” in “black uniforms” is out “to do big damage.”

Is he
A. physically unwell (stroke)?
B. nuts (full-scale paranoia)?

Either way, this is a serious problem. He still controls the nuclear codes.

Shooting an innocent, unarmed black man seven times in the back is like blowing a putt in a golf tournament, according to @realDonaldTrump. Goodnight everyone. Good luck. https://t.co/26TR5o16bt