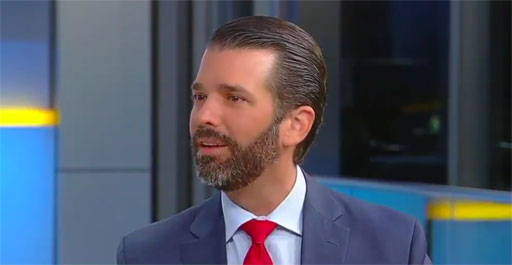 During an appearance on Fox & Friends this morning, Donald Trump Jr. repeated his father’s claim that the Mueller investigation is a ‘witch hunt’ and said folks like former Trump campaign chair Paul Manafort were ‘regular guys’ who couldn’t afford large lawyer fees.

He added that ‘no actual crimes’ have been found by the investigation, only “things that people did in past lives.”

“I’ve been hearing this for two years — everyone is going to jail. Meanwhile, they haven’t actually found anything that relates to this. What they did was put incredible pressure on regular guys that couldn’t afford a million dollars in legal fees, and got them to slip up, say something incorrectly. They pretended they were their friends. There are no actual crimes. There’s only things that people did in past lives, in 2006 before we even thought we ever get into this crazy world, and that’s what it is. They’re touting these things as victories — it’s not; and it has been a total farce, the greatest witch hunt in American history.”

.@DonaldJTrumpJr on MUELLER: “There are no actual crimes. There’s only things that people did in past lives, in 2006 before we even thought we’d ever get into this crazy world… it’s that old Stalinist tactic.” pic.twitter.com/a0gWJaBaaa

I’m not really sure what ‘past lives’ he’s referring to, but if you broke the law, you broke it. And they have found crimes, and folks have pleaded guilty to them.

And the dates of these crimes range from the mid-2000s to as recent as 2016. So, ‘past lives’ sounds a lot longer ago than reality shows.

Plus, if the mid-2000s is too far back to consider crimes, why do the Trumps keep bringing up Bill Clinton’s alleged affairs in the 1990s?

Financial experts say Manafort is worth upwards of $50 million, so I don’t know that I would call him a ‘regular’ guy who can’t afford his legal fees.

TRUMP JR on hate crimes: “Man, to me, it seemed like there were many more hoax hate crimes than there are actual.”