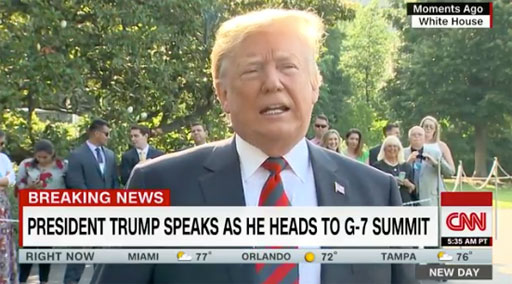 Heading to Canada today for the annual G7 summit,Donald Trump has called for reinstating Russia to the ‘Group of 7’ nations.

Russia was ousted four years ago from the group of leading industrial countries after invading Crimea and they haven’t left.

Why reward Putin and pals for nothing?

“Russia should be in this meeting,” Mr. Trump said. “Why are we having a meeting without Russia being in the meeting? And I would recommend — and it’s up to them, but Russia should be in the meeting, it should be a part of it. You know, whether you like it or not, and it may not be politically correct, but we have a world to run and the G-7 — which used to be the G-8, they threw Russia out. They should let Russia come back in because we should have Russia at the negotiating table.”

Russia joined the group in the 1990s after emerging from the wreckage of the Soviet Union, making it the G-8, but its armed intervention in its neighbor Ukraine in 2014 and seizure of the Crimean peninsula angered other major powers. The remaining members, led by President Barack Obama, expelled it in a sign of global resolve not to let international borders be redrawn by force.

Mr. Trump offered no specific reasoning for why Russia should be let back in even though it retains control of Crimea and has not lived up to an international agreement to end its intervention in eastern Ukraine.

Man, Trump sure is loyal to the country that elected him.

President Trump says Russia should be allowed back into the G7 https://t.co/UtW5t5kYLb https://t.co/QitUSIN7Nx