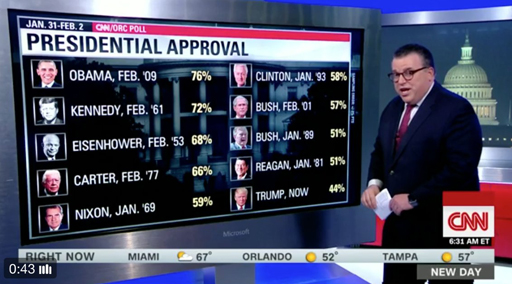 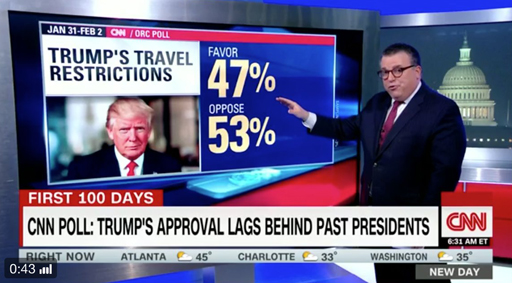 President Trump took to Twitter this morning to rant about so-called “fake news” and “negative polls:”

I call my own shots, largely based on an accumulation of data, and everyone knows it. Some FAKE NEWS media, in order to marginalize, lies!

It seems the president isn’t interested in any opinions that oppose his own. And the “call my own shots” comment would seem to be related to recent reports (like a big TIME Magazine cover story) that White House Chief Strategist Steve Bannon has been directing Trump’s activities behind the scenes.

The latest CNN/ORC poll shows the president continues to be mired in low approval numbers. From job approval (44% approve, 53% disapprove) to his executive order on immigration (47% approve, 53% oppose). 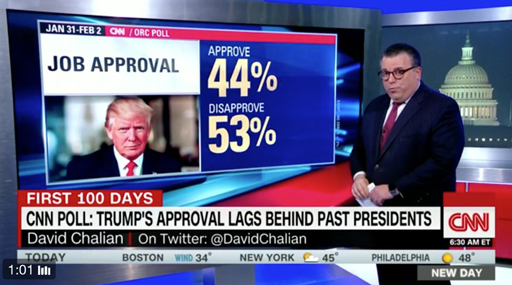 Additionally, he compares unfavorably to his predecessors in terms of approval at this point in a presidential term.

Trump’s tweet seemed to be motivated by a Monday morning segment on CNN’s “New Day.” (The president frequently watches cable news in the morning.)

Then he said, “What about that travel ban policy? How’s the country reacting to that? A majority are opposed. Slim majority. 53% of Americans oppose the travel ban, 47% in favor.”

Trump’s tweet provoked widespread criticism on Monday morning. “This is bizarre behavior. Something is not right,” Joaquin Castro, a Democratic congressman from Texas, responded.