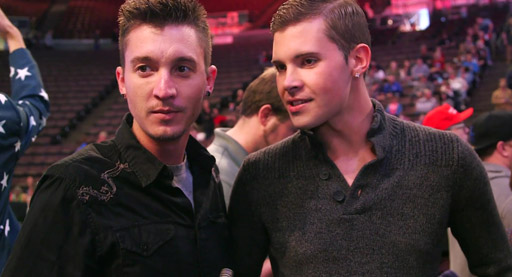 The couple, who said they have “a lot of gay friends that support Trump,” also said they felt comfortable being affectionate amid the Trump crowd.

“Nobody’s saying anything about it,” they said. “No one’s stopped us or done anything, so it’s pretty good.”

When asked why they support the Republican billionaire, one of the men shrugs and laughingly to his bf, “I don’t know, why?”

“I’m tired of the bullshit government,” said the other. “I work in the steel industry and I see it hardcore with the trades and stuff. It’s time for a change. Trump’s the man for it.”

Actually, it’s been noted that Trump himself bought steel for his various construction jobs from over seas.

The first man also chimed in with, “Plus, I really feel like he would bring more jobs to the country. The system and everything could be a hell of a lot better.”