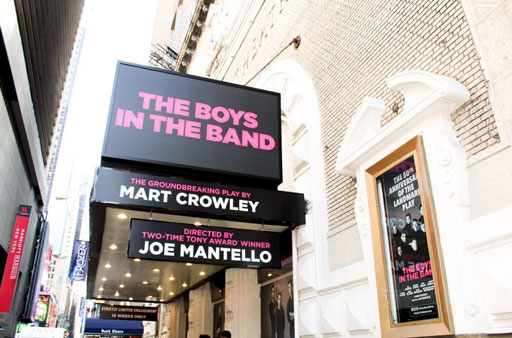 The opening night of the Broadway revival of The Boys in the Band is only weeks away, and we’re already starting to get excited to see the legendary play return to the Great White Way in time for it’s 50th anniversary.

Yesterday, the cast shared a pic of the cast in rehearsal and the marquee over at the Booth Theater is already up.

Two-time Tony award winner Joe Mantello is directing the groundbreaking play, which centers on a group of gay men who gather in an NYC apartment for a friend’s birthday party.

Drinks, music and a hot cowboy stripper slowly peel back the layers of  heartache and self-doubt among the party-goers.

A sensation when it premiered in April 1968, The Boys in the Band was originally scheduled to run for five performances at the Playwrights’ Unit, a small off-Broadway venue. Overnight, the show became the talk of the town for its unflinchingly honest depiction of gay life, and transferred to Theater Four on West 55th Street.

The film adaptation, released in 1970, has a 100 percent positive rating on Rotten Tomatoes.

The party is just getting started… #BoysintheBand starts previews April 30th.
A post shared by The Boys In The Band (@boysbandbway) on Mar 31, 2018 at 7:45am PDT