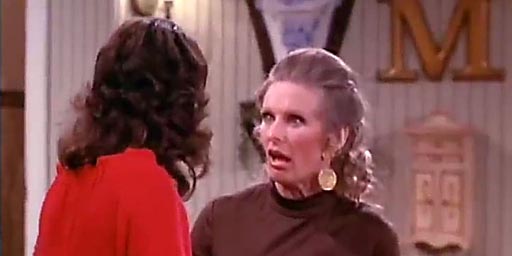 Journalist, historian and all-around smart-gay Matt Baume devotes this installment of his popular Culture Cruise web series on an episode of the iconic1970s sitcom, The Mary Tyler Moore Show.

The year was 1973. Homosexuality was considered a mental illness, you could be arrested for being gay in most of the country, no openly gay or lesbian person had ever been elected to public office. And Mary Tyler Moore, America’s sweetheart, put a gay man in front of viewers for an entire episode without anyone noticing until the last minute — and then acted like it was no big deal. When it was, in fact, a very, very, very big deal.

The episode, titled “My Brother’s Keeper,” aired on January 13, 1973. In the episode, “Phyllis” (played by Cloris Leachman) set out to set up “Mary” (Mary Tyler Moore) with her brother, “Ben.”

It turns out there’s no chemistry there, but Mary’s best friend “Rhoda” (Valerie Harper) ends up finding a connection with Ben. The problem is – Phyllis hates Rhoda, and can’t stand the idea of her brother with Rhoda.

Of course, in the end, Ben it’s revealed that Ben is gay.

What’s important here, though, is how the writers of TMTMS handled the moment. As you may remember, television (or most of America, for that fact) was not welcoming or warm-hearted when it came to ‘the gays.’

As Baume points out, if a gay person was on TV, they were usually portrayed as murderers or perverts. Note the infamous “The Homosexuals” documentary that aired in 1967 that declared “the average homosexual, if there is one, is promiscuous.”

What Baume does so well here is put what could be viewed as just another ‘gay punchline’ into perspective and gives us context on the whys and hows this was actually an important moment.

At the time the episode aired, Minneapolis (where TMTMS took place) outlawed homosexuality even though that same year saw the debut of Minneapolis first Pride event. And 1973 was the year homosexuality was removed from the list of mental illnesses.

I won’t spoil it for you, so watch the video.