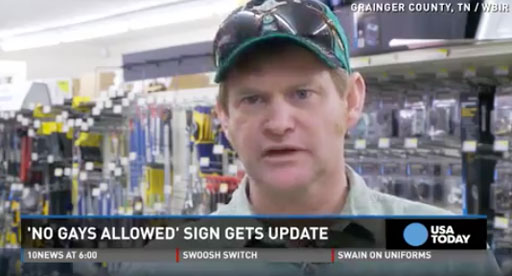 In response to the recent ruling by the U.S. Supreme Court regarding the Colorado baker who refused to sell a wedding cake for a same-sex wedding in 2012, a Tennessee hardware store put up a sign which read, “No Gays Allowed.”

Jeff Amyx, who owns Amyx Hardware & Roofing Supplies in Grainger County, Tennessee., about an hour outside of Knoxville, added the “No Gays Allowed” sign on Monday, because gay and lesbian couples are against his religion.

“They gladly stand for what they believe in, why can’t I? They believe their way is right, I believe it’s wrong. But yet I’m going to take more persecution than them because I’m standing for what I believe in,” Amyx said.

On Tuesday, Amyx removed the “No Gays allowed” sign and replaced it with a sign that says: “We reserve the right to refuse service to anyone who would violate our rights of freedom of speech & freedom of religion.”