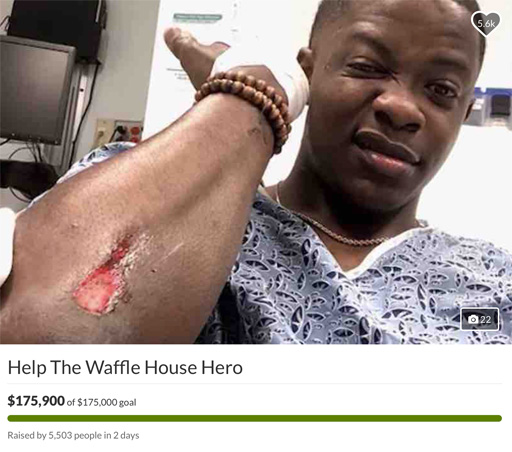 Ali says he was moved to help Shaw, who has a 4-year-old daughter, after Shaw’s selfless takedown of the Waffle House shooter in Nashville, and his fundraising efforts for the shooting victims.

James Shaw Jr. put his life on the line when he took on the gunman who killed four people at a Nashville area Waffle House. Since that horrific shooting, he has raised tens of thousands of dollars for the victims and shown a level of humility that has inspired many of us.

I normally don’t get involved directly in these matters, but James’ grace has inspired me to start this page to give him the support I feel he deserves.

According to news reports, James has a four-year-old daughter. Perhaps this money can be used for her college fund or some other education related expense. But I’d be just as happy if James used some of this money to take his family on a nice vacation.

Funds will be transferred directly to James Shaw Jr. through GoFundMe.

James Shaw Jr. is now reportedly paying for all four of the funerals of the shooting victims out of the GoFundMe campaign money.

To date, Donald Trump has not acknowledged the heroic actions of Shaw during the shooting.