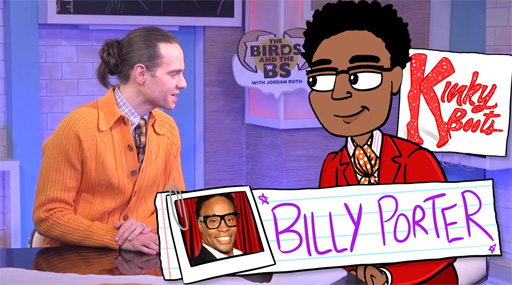 Launched this week, Roth’s comedic web series, “The Birds and the BS,” is intended to address the cultural coarsening of America under Donald Trump.

Roth told The New York Times, “We need a kids’ show for us, to remind ourselves of these basic human decencies in the complicated adult world that we now swim in, and if we can do that with a laugh and a catchy tune and a little bit of shock, then we might actually watch it, and then think about it.”

The video, which includes off-color language, features an animated character voiced by Billy Porter, an actor who won a Tony Award for his role in “Kinky Boots” (a show produced by Ms. Roth and housed in a theater owned by Jordan Roth). Mr. Porter’s animated avatar, shown alongside a sketch of Mr. Trump, says “even though they say he has tiny hands, they’re actually making fun of something else,” as an arrow points to the Trump image’s crotch.

But the animated Billy Porter then says there are better ways to criticize the president.

“We grown-ups should know better than to make fun of people’s appearances, even the people we hate,” Mr. Porter says. “There are far, far better, things to debase, like his flabby punctuation, comb-over obfuscation. It’s his shameful bigotries that look so dumpy in his khakis.”

In an interview, Mr. Porter said he agreed to participate as an expression of his opposition.

“It’s about the resistance,” he said. “James Baldwin says it’s the artist’s job to disturb the peace, and I take that very seriously. I’m not a community organizer, I’m not a politician, but with creative energy I can help change hearts and minds with my stuff.”