Erik Siegrist, writing for Rotowire, has an interesting take on Markus Golden, Defensive End for Mizzou, who’s up for the NFL draft this year.

He compares Golden to another player from last year’s draft in terms of stats and play: 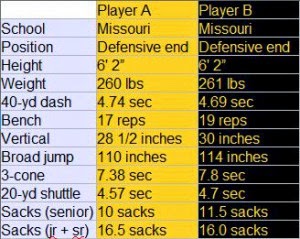 Cutting to the chase, I’m sure regular readers (who must be wondering why I’m writing about a DE from Missouri out of nowhere) will guess: Golden is Player A and out footballer Michael Sam is Player B.

Like Sam last year, Golden’s size has most teams viewing him as undersized for a DE, but a possible candidate to move to OLB instead. Like Sam last year, most experts are viewing Golden as a probable mid-round pick, possibly sneaking into the third round but more likely getting selected on Day Three.

Last year, in a deep class for pass rushers, 43 DEs and OLBs came off the board before Sam was selected late in the seventh round.

But when on paper two players are so similar, if there’s a wide divergence in their fates in the draft, you have to start looking seriously at other factors to explain the discrepancy.

Through no fault of his own, Markus Golden is in a position to almost single-handedly prove (or disprove) the most common theory as to why Michael Sam is currently not with an NFL team, even on a futures contract.

The NFL continues to hold the line that Sam isn’t on an NFL roster because he wasn’t good enough.

We’ll see if the same stats – without the cache of being Co-Defensive Player of the Year for the SEC as Sam was – will work better for Golden.

And that will definitely tell us something. Won’t it?