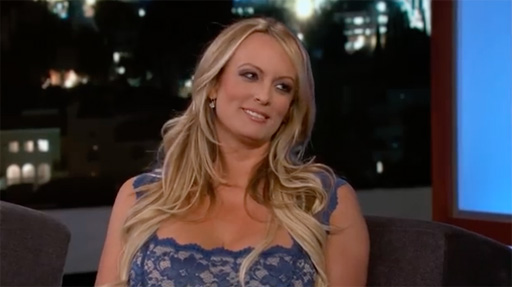 The appearance, obviously, was Kimmel’s attempt to see if he could get anything out of Daniels regarding an alleged sexual relationship she might have had back in 2006 just months after Melania Trump would have given birth to Trump’s third son, Barron.

InTouch Weekly recently published a 5,500 word interview that had been conducted back then but never released.

Now, all that aside, the fun here is watching Daniels navigate the Kimmel mine-field. Will she slip up? Will she say anything?

My take is: she’s a smart girl, and charming. She handles herself well and comes across as confident and composed.

One of the better quotes from the interview comes when Kimmel asks what she thought of Donald Trump inviting three of Bill Clinton’s accusers to one of the 2016 presidential debates.

Her take? “Dirty. And I know a lot about dirty. Even I wouldn’t do that.”

Kimmel also asked the entertainer if she actually signed a document that purports to deny the alleged affair to which she responded with a smile, “I don’t know. Did I? It doesn’t look like my signature, does it?”

The segment is fluff but there’s a sense of fun to the whole thing. Good for her for handling it so well.