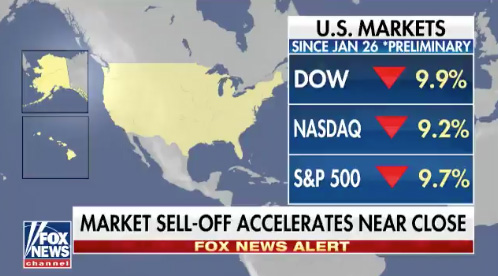 Another huge drop in the stock market today. Today’s losses mark the second biggest point drop ever closing down over 1,000 points.

The biggest point drop ever was on Monday of this week.

In November, Trump promised if the tax cut bill passed Americans would “see some great results.”

Great numbers on Stocks and the Economy. If we get Tax Cuts and Reform, we’ll really see some great results!

The stock market today had its second biggest point drop ever closing down over 1,000 points. The biggest drop before that was just a few days ago. This is the trump economy

Stock market plunged another thousand points today. If this keeps up, Donald Trump will begin ranting about “Little Dow Jones” and threatening to have him deported.

I don’t think the President has all power over the stock market, but he has SOME. Now that we’ve had the two largest point drops ever in the history of the stock market within a week, why is it again we’re trusting a guy who’s gone bankrupt 6 times to lead our country?

U.S. stocks plunged down nearly 700 points by midday today, a loss of almost 2.5%. It’s the fourth ugly day in global markets. President Trump has hailed a booming stock market as a measure of his presidential success.
Now what will he say about this?