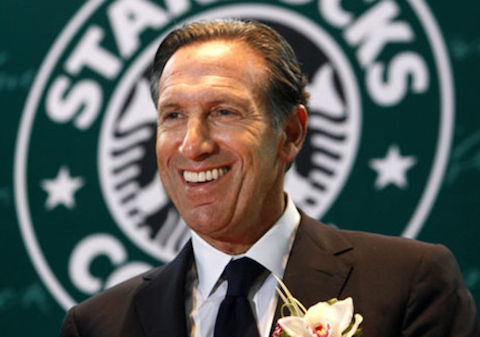 Starbucks CEO Howard Schultz, at the company’s annual meeting in Seattle, defended his company’s support of same-sex marriage to a disgruntled share holder.

At the company’s annual meeting Wednesday, shareholder Tom Strobhar suggested that the boycott had indeed bled the company of value.

“In the first fill quarter after this boycott was announced, our sales and our earrings — shall we say politely — were a bit disappointing,” he said.

CEO Howard Schultz shot back that the decision to back gay marriage was not about the bottom line, but about respecting diversity. He said the company had delivered a healthy return last year, boycott or no.

“If you feel, respectfully, that you can get a higher return than the 38 percent you got last year, it’s a free country. You can sell your shares of Starbucks and buy shares in another company. Thank you very much,” he said, to loud applause from the audience.

Excuse me while I run to Starbucks to buy something…