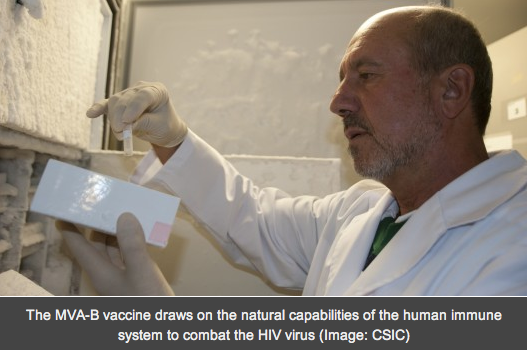 Researchers at the Spanish Superior Scientific Research Council (CSIC) have successfully completed Phase I human clinical trials of a HIV vaccine that came out with top marks after 90% of volunteers developed an immunological response against the virus.

The MVA-B vaccine draws on the natural capabilities of the human immune system and “has proven to be as powerful as any other vaccine currently being studied, or even more”, says Mariano Esteban, head researcher from CSIC’s National Biotech Centre.
The trial demonstrated how the vaccine stimulates the production of lymphocytes B, which produces HIV attacking antibodies that block the virus from infecting healthy cells.

“MVA-B immune profile meets, initially, the requirements for a promising HIV vaccine,” says Esteban. Although it does not remove the virus from the body, the immune response induced by the vaccine could keep the virus under control by destroying the infected cell.

According to CSIC, “if this genetic cocktail passes Phase II and Phase III future clinic trials, and makes it into production, in the future HIV could be compared to herpes virus nowadays”.

Phase I clinic trials will also commence with HIV infected volunteers to test its efficiency as a therapeutic vaccine.