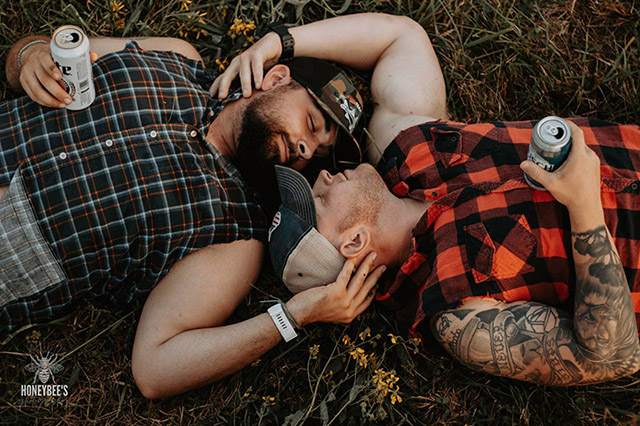 How much do I love this photoshoot?  I’m pretty sure this is the exact opposite of ‘toxic masculinity.’

Photographer Kait Lewis, who lives in Virginia, recently posted this collection of photos to Facebook featuring her fiancé, Devon (bearded), and his bestie since 8th grade, Trevor.

Lewis recently launched her own family photography studio, Honeybee’s Photography, and when Trevor (who lives hours away) came to visit, she suggested the fun, lighthearted photo shoot.

Both men are straight and have no issues in expressing their friendship.

And did I mention they’re both totally woofy?

“How hilarious is this session?” wrote Lewis on Facebook. “My fiancé’s bestie came to town so I jumped at the opportunity to capture their *unique* friendship!”

She prefaced the post with a ‘Viewer Discretion Advised’ tag which apparently confused a few folks.

“I LOVE these photos!” wrote one gay man in the comments. “It’s important to show two men can have a friendship like this and it be completely okay. Disappointed in the ‘viewer discretion advised.’ I saw that you said you’re a family-friendly business, but if this were a male-female couple, or two female friends the advisory wouldn’t be there. As a gay man, I’m disappointed because it only perpetuates male physical contact as inappropriate which encourages fragile masculinity and homophobia.”

Lewis later added that it was the inclusion of alcohol and the suggestive poses, not the men’s genders, that prompted the advisory tag.

“The viewer discretion was added because I am a family friendly photographer and the sexual posing and alcohol needed to be warned to AVOID offending people,” said Lewis. “It has nothing to do with the genders. Everybody’s interpretation on what is sexual and what is not is very different.”

“I stand by the advisory and will not be removing it,” she added. “I wasn’t anticipating this post to reach 6,000,000+ people in a matter of 2 days. Unfortunately, with a lot of views, comes a lot of opinions and you can’t please everybody.”

“If you are offended by ANY of this (the photos or the caption), feel free to keep scrolling.”

The photos picture Devon and Trevor walking hand in hand wearing daisy duke shorts, hugging it out, pouring beer in each other’s mouths, and even recreating a famous moment from the film Titanic.

Lewis playfully suggested in her post that Busch Beer should sponsor her.

And while some photographers may have issues with shooting same-sex couples, Lewis said she would “absolutely” welcome the opportunity to photograph LGBTQ couples and weddings.

“People who refuse clients for any reason regarding who they love is beyond me,” Lewis recently told Queerty. “It’s baffling, disgusting, and downright ridiculous. The sex of the people getting married makes no difference to me.”

Since sharing the photos on September 7, the post has been shared over 42K times and received 24K comments.

The vast majority of Facebookers applauded the fun and spirit of the shoot.

“Thank you for sharing the story of their friendship and your love together! I love it!” wrote one woman.

Another commented, “The photography is beautiful, the friendship is next level, and these guys are hilarious & adorable! It’s obvious they’re having a great time!”

“Men comfortable enough in their sexuality to appreciate a bromance. It’s truly heartwarming. These guys are amazing.”

“These are fantastic.. a true friendship… bromance at its best. Good for them.”

Thank you for breaking down the barriers! I love when men are open enough to love their friends and show it.”

“If you have never been around men in the military then you might not understand the closeness that some men are able to share due to either a long relationship or a relationship forged in tough circumstances. I feel sorry for people that will never be this close to each other.”

Lewis and Devon plan to tie the knot on April 10, 2021. Congratulations to the happy couple.

You can view all the photos from the shoot on Honeybee’s Photograph Facebook page here and check out the official website here.