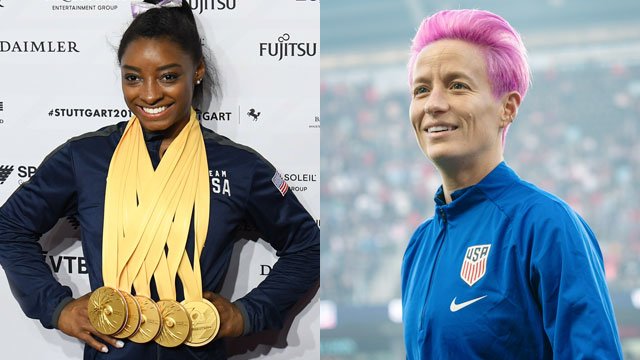 Earlier this week, Simone Biles –  Olympic and World gymnastic champion –  became the youngest person ever to receive the Presidential Medal of Freedom. But wait…there’s a twist.

The nation’s highest civilian award, the medal is given to individuals who “have made exemplary contributions to the prosperity, values, or security of the United States, world peace, or other significant societal, public or private endeavors,” the White House said.

You’ll recall Biles took herself out of competition in the middle of last year’s Summer Olympic Games because she was having cognitive issues and couldn’t tell where she was in mid-air. She passed the baton on to her teammates, but returned for the individual beam competition where she scored a Bronze medal for Team USA.

Additionally, out professional soccer player Megan Rapinoe, who won 2 World Cups, an Olympic Gold and was named Best Player in the World in 2019, was also recognized with the Medal of Freedom.

A champion, on and off the pitch. 🇺🇸

Believe it or not, not everyone was happy about those who were chosen for the prestigious honor.

Jenna Ellis, a former lawyer for President Trump’s campaign (you know, the one who lost more than 60 fake ‘voter fraud’ cases), took to Twitter to criticize Biles and Rapinoe.

Because Biles is a selfish quitter and Rapinoe is a boorish unAmerican bully. They’re losers, not role models. Biden is making a mockery of everything solemn, like the presidential medal of freedom. https://t.co/gBKTaKYu23

Now, y’all, I’ve always hated name calling. And being a young gay growing up in Texas, I got my share of being taunted with ugly names.

But HOW you call Simone or Megan “losers” is beyond the pale. They are literally the definition of champions.

The Twitterverse had a little something to say:

If you knew anything at all about elite sports, you would know what Biles did was actually unselfish, but you wouldn’t know the meaning of that , would you? And what exactly did you ever win? Any Olympic medals? Anything? I’ll hold…
Still holding….#nevermind

Especially since those two women have 9 Olympic medals and all Ellis will be known for is Rudy Giuliani’s fart recipient.

Simone Biles won 19 World Championship Golds, 4 Olympic Golds and is the most decorated gymnast in US history. Megan Rapinoe won 2 World Cups, an Olympic Gold and was named Best Player in the World in 2019.

You lost 63 lawsuits and got farted on by Rudy Giuliani.

Your only significant achievement is catching covid from Rudy Giuliani’s fart.

Maybe have all the seats, Jenna.

I’m not sure what your issue is with Simone other than the fact that she was selfless enough to stand back when she wasn’t prepared rather than sacrifice the team.
Your team is so in it for themselves that you wouldn’t even understand what empathy is.

Biles is not a selfish quitter. She is a human being who can make her own decisions regarding her mental health. She is one of the most winning olympiads. Rapinoe is a tireless advocate for equal pay for women and human rights. Funny how you think that is all wrong.

who is Jenna Ellis? Asking for everyone https://t.co/nFhGIUJf9D