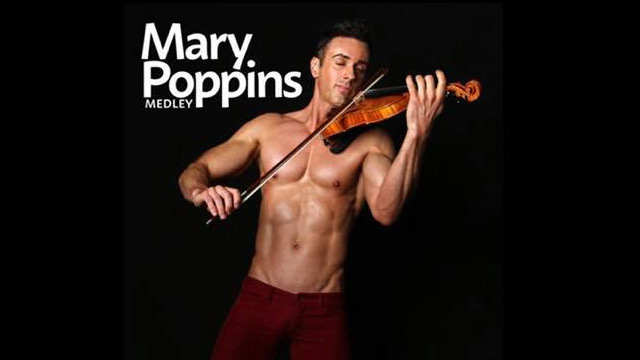 Olshefski shares that in his strict childhood household, the television remained off during the day. No movies, no television whatsoever.

During a chicken pox outbreak that got Olshefski and his brother and sister, the trio was so miserable due to the itching, his mother agreed to bring the television set out of the closet (serious metaphor there) and allowed them to watch Mary Poppins as a distraction.

While only a temporary fix, the Disney magic of Julie Andrews and Dick Van Dyke kept the itching at bay for at least an afternoon our shirtless hero never forgot.

Those musical memories and the recent reboot moved him to shoot his new music video complete with hunky pianist, Johnny Walsh.

The video begins with the camera gliding in through the clouds (sans umbrella) to what appears to be an English mansion much like the Banks family occupies in the Poppins films.

Moving from the expansive gardens to inside the house, the Shirtless Violinist delivers his own touch of magic.

All the songs we know so well – “Feed the Birds,” “Supercalifragilisticexpialidocious,” “Chim Chim Cher-ee,” and “Let’s Go Fly a Kite” – are artfully woven in here.

Olshefski even wears red pants in homage to Poppins’ famous red coat as the camera rises back up and into the clouds.

And you should check out more of his music on his official website here.

Hit the play button below. I promise it’s better than a spoon full of sugar.