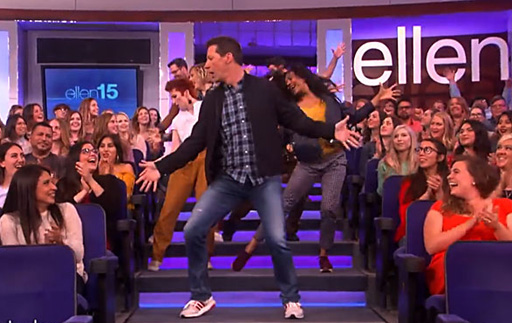 Will & Grace star Sean Hayes filled in for Ellen DeGeneres today as guest-host for her talk show.

Explaining her absence, Hayes shared, “She tripped and fell and is trapped under the weight of her own wallet.” He then admitted, “I really don’t know where she is. I assume Home Depot – that’s where all the lesbians go…?”

Along the way, Hayes reminded the audience that, although he hasn’t hosted a ‘talk show’ before, he does have some experience to draw upon.

“I do know my way around a television stage – I’m on a little show called Will & Grace,” said the sitcom veteran.

“And before that, I was on another show – called Will & Grace.”

“I’ve also been on Broadway. Maybe you’ve heard of the award-winning musical, Hamilton? (Applause) I saw that, too.”

Hayes assured the ELLEN audience that he’s “not going to change” anything in the show, except for that dancing thing.

“I don’t have anything prepared,” says Hayes. “And these shoes aren’t even good for dancing.”