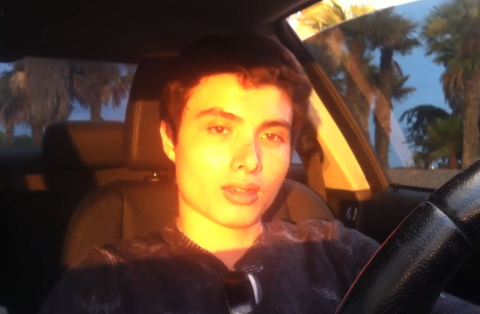 Elliot Rodger, a mentally ill 22 year-old college student in Santa Barbara, California is dead after killing six people and injuring many others in what police are calling “premeditated mass murder.”

The shooting spree came the day after the killer posted a frighteningly calm YouTube video titled “Retribution” saying that he was a virgin and, angry at the women who dismissed him, vowed to take revenge:

“For the last eight years of my life, ever since I hit puberty, I have been forced to endure an existence of loneliness, rejection and unfulfilled desires, all because girls have never been attracted to me,” he said, looking into a camera on the dashboard of his vehicle with palm trees in the background.

“I will punish all of you for it,” he said with a sinister laugh, saying he would enter a sorority. “I will slaughter every single spoiled, stuck-up blond slut I see inside there.”

Rodger was identified by his father through the family lawyer. He was being treated by multiple therapists and was a student at Santa Barbara City College, said Schifman.

We, the public,  sees behavior as demonstrated below by Rodger only in the movies.  It’s chilling to know that what you are watching was real.

Several comments on the video suggest Rodger was gay, but Daily Kos did some digging and point out his use of the phrase “the True Alpha Male.” Those in the Mens Rights Movement use that phrase to describe what they aspire to be. Daily Kos found that Rodger subscribed to many men’s rights channels on Youtube.