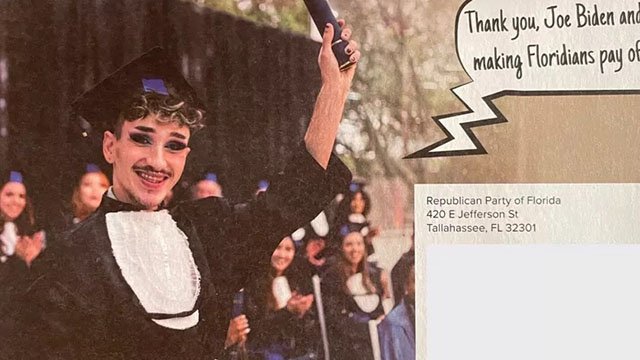 It uses slick disinformation about DeSantis’ Democratic opponent, @CharlieCrist, including the claim that @JoeBiden‘s student loan plan would force “hard-working Floridians to pay back student loans for degrees like Gender Studies and French Poetry.” https://t.co/ivoX0Mqjcc

The flier also includes a photo of a student wearing makeup during their graduation ceremony. A speech bubble drawn over their head shows the student saying: “Thank you, Joe Biden and Charlie Crist, for making Floridians pay off my student debt.”

The photo appears to be a stock image of a nonbinary student at a graduation.

The Advocate reviewed available Getty images and discovered that the photo is a series of graduation photos taken not in Florida but in Brazil.

“That this ad and others like it are running in 2022, not 1970, tells us the kind of future envisioned by DeSantis and his right wing cronies.”

“These extremists are hellbent on returning us to the darkest days of anti-LGBTQ hysteria that fueled discrimination, bigotry, and violence against the community.”

“The war they are waging against equality ― and LGBTQ Floridians ― is dangerous, cynical, and should be condemned by all who want to see a Florida that is more inclusive of and safe for all people.”

The queerphobia coming out of today’s Republican Party is so sad and disgusting. Their desperation to rebrand President Biden’s student loan debt reform efforts are also pathetic. pic.twitter.com/fhJ9xX2pl8

Ron DeSantis @RonDeSantisFL does not approve of gay people living in Florida. This mailer from his campaign is the furtherance of his anti-gay propaganda and *everyone* that votes for him is saying that they approve of this disgusting bigotry and hate. #Florida pic.twitter.com/msC0CgoT3v