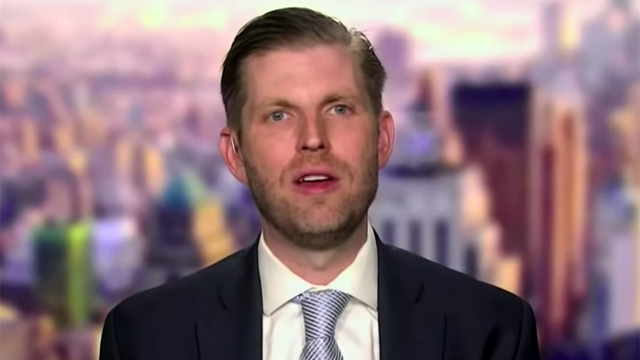 The House committee looking into how and why the violent January 6 invasion of the U.S. Capitol building occurred has subpoenaed and obtained phone records for one of the former guy’s children, Eric Trump, as well as Kimberly Guilfoyle, who is engaged to Donald Trump Jr.

The Jan. 6 Committee has subpoenaed and obtained records of phone numbers associated with Eric Trump and Kimberly Guilfoyle. https://t.co/0Mn2uxO3Tn

It appears to be the first time the select committee has issued a subpoena that targeted a member of the Trump family, in what marks a significant escalation of the investigation into Trump’s role in the January 6 insurrection.

These records provide the committee with logs that show incoming and outgoing calls, including the date, time and length of calls. The records also show a log of text messages, but not the substance or content of the messages.

Both Eric Trump and Guilfoyle played prominent roles in Trump’s “Stop the Steal” efforts, including fundraising off the lie that the election was stolen. Both spoke at the January 6 rally on the Ellipse that preceded the attack on the Capitol.

You might recall Guilfoyle became rather infamous after her off-the-hook speech at the 2020 Republican convention.

Lots of Republicans in Congress are freaking out right now since Jan 6 Cmte got Eric Trump’s phone records.

Never forget that Kimberly Guilfoyle was not only at the Trump command center on January 6, but she also danced a jig of glee while it was all happening. https://t.co/6lK1OAs1YH pic.twitter.com/wMm1DEMIim