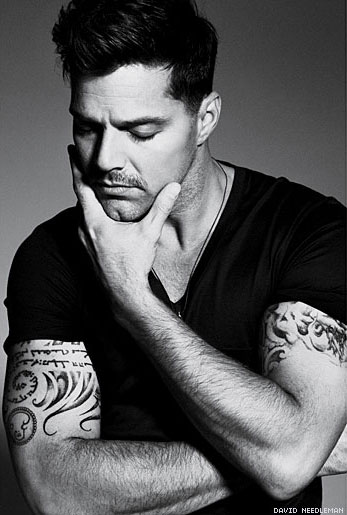 Exceprt from Ricky Martin in The Advocate:

Until this year’s guest appearance on Glee, Martin hadn’t acted since Les Misérables. Glee cocreator Ryan Murphy, a fan of Martin’s, had pursued the singer and wrote the episode specifically for him. “He has such star power,” Murphy says. “Even the straight boys in the cast were just gob-smacked by his confidence and said if they ever turned, it would be for Ricky Martin.”

The pleasant experience Martin had on Glee makes him wonder why he’d waited so long to return to acting. “I was very busy with so many things that I didn’t realize I missed acting,” he says, before adding with a laugh, “This had to happen.”

Martin is referring to the Broadway revival of Evita, which will open this month. The performer, who made his debut on the Great White Way nearly 16 years ago (as the love-struck Marius in Les Misérables), will headline this reportedly sexier restaging of Evita as Che, the rebellious voice of the people and antagonist to Argentinean first lady Eva Perón.

Che’s conflicting emotions are appealing to Martin. “I get to feel many things. I can go from anger to love to uncertainty within 30 minutes of the show,” he says. “That’s amazing because that’s what my life has been about for the last three years—feeling. Not sabotaging any kind of emotions. Letting everything just come through me and verbalize it. It’s a very spiritual exercise that I’ll do every night.”

But it’s the common cause Martin finds in his character’s desire to correct social injustices that really inspires him. “The man I’m portraying is all about the people and working for human rights,” Martin says. With the Ricky Martin Foundation, an organization committed to ending human trafficking and the exploitation of children, Martin too has been working for human rights. “And since I came out, I’ve been verbal about the importance of equality and what needs to be said. That’s what Che is about too. That is going to be my inspiration, my motivation every night.”

Read more of the interview at The Advocate.