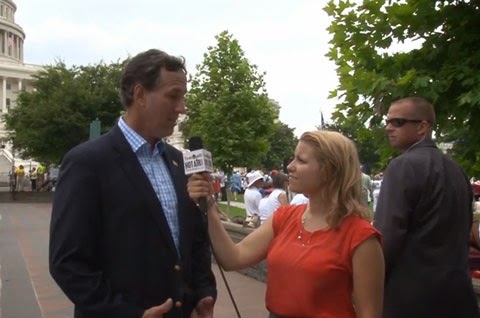 While many GOP politicians are beginning to put some distance between themselves and publicly opposing same-sex marriage, Rick “Frothy Mix” Santorum certainly wasn’t going to miss a chance to spout some anti-gay rhetoric at yesterday’s hate rally sponsored by the National Organization for Marriage.

Where once there would have been many conservative politicians lining up to speak out against equal rights for the LGBT community, yesterday’s epic fail of an event in Washington DC only saw the barest handful show up.  Billed as a kind of “national event,” the rally turned out only about 2,000 attendees.

Watch Frothy Mix tick off his usual reasons why the gays shouldn’t marry, including the mystifying idea that same-sex marriage is bad for the economy, when study after study shows gay marriage adds millions to states economies as states have seen the freedom to marry become legal across the country.