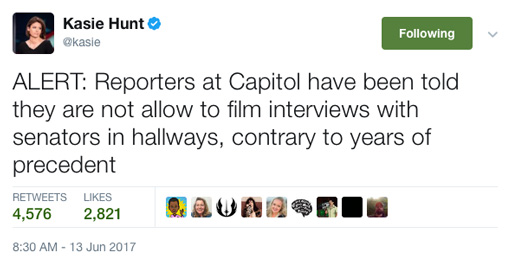 Reporters have been informed today that they will no longer be allowed to conduct interviews in the hallways of the Senate without filing for permission for each interview in advance.

Trying to shut down press coverage of the Senate’s meetings on upcoming healthcare legislation, I’d imagine.

ALERT: Reporters at Capitol have been told they are not allow to film interviews with senators in hallways, contrary to years of precedent

CONDITIONS for any interview: Previously granted permission from senator AND Rules Committee of Senate

I was just told I cannot stand outside of the Budget Committee hearing room to interview lawmakers. https://t.co/gBdkztGLfO

Senate Rules Committee and @SenateSAA trying to SHUT DOWN press access in halls. No more staking out hearings without permission. Not OK.

At least one Senator, Chris Murphy of Connecticut, said he can handle himself:

Maybe not the right moment to lower the secrecy veil on Congress. To whoever is trying to protect Senators – we can fend for ourselves. https://t.co/YSbTuaIZKV

NEW: Senate Rules Committee reverses course on hallway interviews. "You may continue to follow the rules as if it was yesterday."— Kasie Hunt (@kasie) June 13, 2017