The premiere of the new MTV reality show “The Real Friends of WeHo” is around the corner, but there are already grumblings about the series – including from one cast member.

Maybe Dorión’s body language in the first promo image was a hint to how he felt about all this. He’s far left in the image below.

A post shared by The Real Friends of WeHo (@realfriendsmtv)

Billed as an “unfiltered and honest look at a select group of friends living, loving, and pursuing their passions in the West Hollywood community,” some folks — including cast member Dorión Renaud — are throwing shade at the show including calling the situation “fake.”

Celebrity blogger BScott reports that Renaud, the CEO of Buttah Skincare, recently shared on his Instagram Stories, “The Fake Friends of WEHO. And I barely know most of these people. Btw I live in The Valley.” He then added, “But tune in thanks @mtv.” 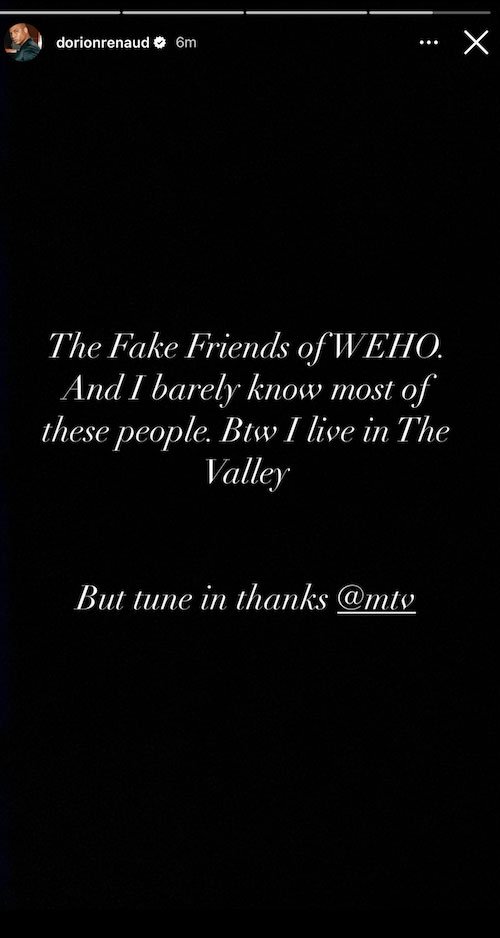 Over on Twitter Renaud went further tweeting, “Buttahh Skin is my only Real Friend lol” and “Chile… I don’t know these people.”

It’s worth noting that Renaud doesn’t use his Twitter account very often. In fact, before these two recent tweets, his account had been dormant since early last summer. So, he must has felt strongly about something to pick up the Twitter quill again.

Buttah Skin is my only Real Friend lol.

I remember seeing a tweet last week from Eating Out actor and singer Chris Salvatore about a “certain reality show” that he was fired from last year. He mentions that “3 gays” on the show refused to film with him because he has an OnlyFans account, so he was fired.

Folks are now of the opinion that reality show is “The Real Friends of WeHo.”

“Literally never worked with more awful people,” he added. He also shared that one of the gays that eventually called to apologize had previously sent their naked pics to him a few years back.

Last year, 3 gays from a certain reality show refused to film with me for having an OF so I was fired by production after filming for only a week. That’s about all I can say…for now 🫢

But I will leave you with this. The one that called me to apologize…err I mean further criticize and gaslight also had sent me his nudes a few years back. pic.twitter.com/PW2qbz5a1r

For those interested, The Real Friends of WeHo premieres on MTV on Friday, January 20 at 9pm ET/PT, following RuPaul’s Drag Race.

They just do it better. 💘 The #RealFriendsOfWeHo premieres Friday, January 20th at 9/8c after @RuPaulsDragRace, only on @MTV! ✨ pic.twitter.com/0rPefefKTm