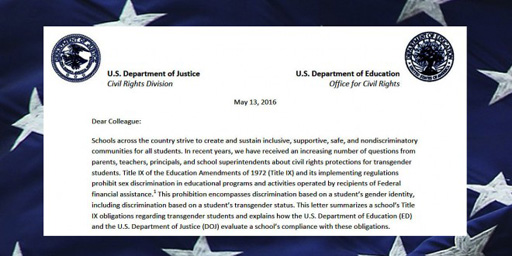 This morning, the U.S. Justice and Education Departments issued joint guidelines to public schools on how transgender students should be treated and protected from discrimination.

Groups from across the political spectrum weighed in immediately.

“These groundbreaking guidelines not only underscore the Obama administration’s position that discriminating against transgender students is flat-out against the law, but they provide public school districts with needed and specific guidance guaranteeing that transgender students should be using facilities consistent with their gender identity,” said HRC President Chad Griffin. “This is a truly significant moment not only for transgender young people but for all young people, sending a message that every student deserves to be treated fairly and supported by their teachers and schools.”

“President Obama has affirmed today the lives of transgender young people and that they deserve human dignity and respect for who they are,” said Shane Windmeyer, Executive Director of Campus Pride. “Saving lives of trans youth means taking action and responsibility to ensure their safety in schools. We applaud President Obama for his leadership and these guidelines that make it clear that discrimination toward transgender students is against the law. There is now direction, without any doubt, for public and federally funded colleges and universities that trans students are entitled to using facilities consistent with their gender identity.”

“This is a big day for the transgender community. It means that the Department of Education’s Office of Civil Rights will accept allegations of discrimination, investigate them, and may bring claims in federal court. The other implication — especially with regard to North Carolina’s HB2 — is that the federal government will leave no stone unturned when enforcing already existing civil rights laws against illegal sex discrimination. This sends a clear message for the repeal of HB2 and to other states that are currently considering discriminatory legislation. This is very good news for the advancement of LGBTQ freedom, justice, equity and equality,” said Victoria Rodríguez-Roldán, J.D., Director, Trans/Gender Non-Conforming Justice Project, National LGBTQ Task Force Action Fund.

And, of course, the haters are howling.

From the Dallas-Fort Worth NBC affiliate:

Texas Lt. Gov. Dan Patrick spoke to NBC 5 soon after the directive was first reported, saying, “This will be the beginning of the end of the public school system as we know it.”

Patrick compared the guidance from leaders at the departments of Education and Justice to a recent guideline from the Fort Worth school district superintendent meant to accommodate transgender students.

“I got news for President Barack Obama. He ain’t my President and he can’t tell me what to do. That letter is going straight to the paper shredder. I have 5 daughters myself and I have 2,500 girls in my protection. Their moms and dads expect me to protect them. And that is what I am going to do. Now I don’t want them bullied, but there are accommodations that can be made short of this. He is destroying the very fiber of this country. He is not a leader. He is a failure.”

Anti-LGBT activist Tony Perkins sent this out via email begging for money (why does he need money to stand up to something?):

Protect Our Children! The Obama administration is ramping up its efforts to force public schools to allow students to use the restroom and locker rooms of the opposite sex. Boys who are clearly boys would be free to use the girls’ facilities and vice versa.

And if parents and students object? They are either ignored or vilified as bigots. It’s all part of the U.S. Department of Education’s “Title IX Mandates” (Title IX is part of the U.S. Education Code governing federal rules for education).

These rules have been revised to provide special protections for “transgenderism” — boys or men who perceive on any given day they identify as a female, or women and girls who perceive they are male.

You’ll note how Perkins uses language like “boys or men who perceive on any given day they identify as a female.” No, Tony Perkins, transgender females don’t switch their gender identity on a whim.

If some straight, male predator puts on a dress to go into a ladies room and he doesn’t actually identify as female then these protections will not apply. These guidelines are for transgender students who are simply trying to live their lives (and use the bathroom).