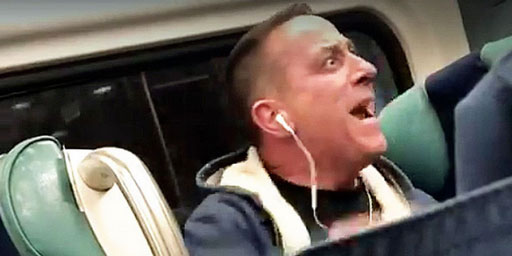 The New York Daily News reports that a passenger on the Long Island Railroad who was caught on video spewing a racist, profanity-laden rant has been charged with a hate crime and could end up behind bars for the angry tirade.

Queens DA Richard Brown charged Edward Ruggerio, 58, with menacing as a hate crime for his verbal attack on a fellow passenger whome he threatened physical assault. Ruggerio will also face a count of second-degree aggravated harassment — crimes punishable by up to a year in jail and $1,000 fine.

Ruggerio claims he was upset that Orelian was talking too loudly with friends. “Shut the f–k up, you f—ing loud-mouthed monkey motherf—er,” he screamed at her. “I can’t listen to your f—ing black ass no more … You f—ing loudmouthed bitch … At least I got a f—ing mother. Do you know who your mother is? You don’t know who your mother or your father is because you’re a f—ing monkey, that’s why.”

Watch the report from the New York City ABC affiliate below.