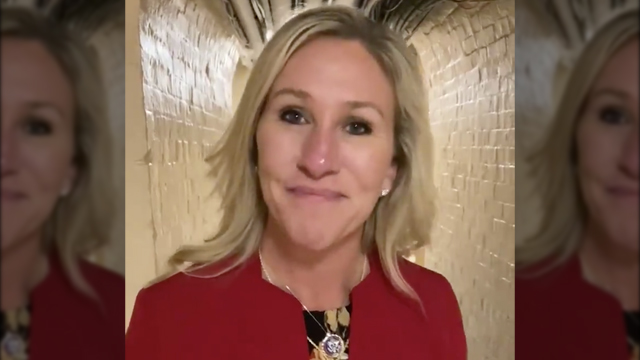 A review of hundreds of Facebook posts by freshman Rep. Marjorie Taylor Greene (R-GA) reveals repeated support for executing prominent Democratic politicians in 2018 and 2019 before being elected to Congress.

In one post, from January 2019, Greene liked a comment that said “a bullet to the head would be quicker” to remove House Speaker Nancy Pelosi. In other posts, Greene liked comments about executing FBI agents who, in her eyes, were part of the “deep state” working against Trump.

In one Facebook post from April 2018, Greene wrote conspiratorially about the Iran Deal, one of former President Barack Obama’s signature foreign policy achievements. A commenter asked Greene, “Now do we get to hang them ?? Meaning H & O ???,” referring to Obama and Hillary Clinton.

Greene replied, “Stage is being set. Players are being put in place. We must be patient. This must be done perfectly or liberal judges would let them off.”

There’s much more at the link. I encourage you to read the full article.

Oh, I see…it’s not her fault. She’s not to be held responsible for what occurs on her own social media accounts. It’s ‘other people’ to blame.

Fake News CNN is writing yet another hit piece on me focused on my time before running for political office.

I will never back down to the enemy of the American people and neither should you. pic.twitter.com/K3JuvqrDGS

CNN also found footage of Greene harassing David Hogg, one of the survivors of the deadly Parkland shooting. Greene reportedly spread a conspiracy theory that Hogg was a “bought and paid little pawn” in calling for commonsense gun control measures.

She also called the mass shooting a ‘false flag’ event.

This is from before her time in Congress, but is this what she did with her time? Follow and harass a high school student? This video was recorded just weeks after the shooting incident.

.@mtgreenee, is this you harassing @davidhogg111 weeks after the Parkland shooting, that my daughter was killed in & he was in? Calling him a coward for ignoring your insanity. I will answer all of your questions in person. Get ready to record again.pic.twitter.com/aQjL74x7kh

Parkland survivors are calling for Rep. Marjorie Taylor Greene to resign for calling the shooting a "false flag" to push gun control https://t.co/eJZ4Zu7f1y