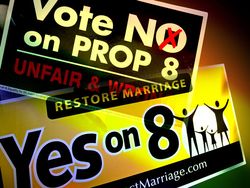 The anti-gay proponents of Proposition 8 have filed their opening brief with the Supreme Court.

Arguing
that the case brought by same-sex couples seeking to marry was unlike
past gay rights cases where the court struck down anti-gay restrictions
and also unlike Loving v. Virginia, in which the court struck down bans
on interracial marriage, the proponents of Proposition 8 argue that
there is no historic reason “for invalidating marriage as it has existed
in California for virtually all of its history, as it was universally
understood throughout this Nation (and the world) until just the last
decade, and as it continues to be defined in the overwhelming majority
of States and Nations.”

SCOTUS is scheduled to hear oral arguments on March 26.