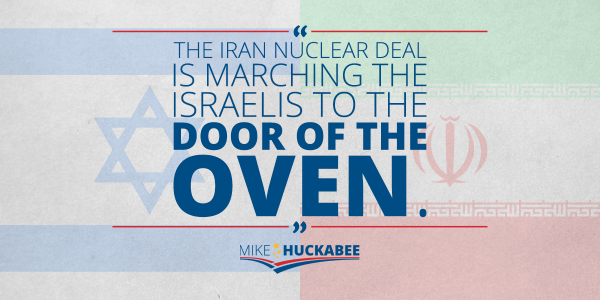 Speaking at a press conference in Ethiopia, President Obama slapped back at current GOP presidential hopefuls who have taken to making “ridiculous” claims about his policies, and “outrageous attacks” that were unbecoming to presidential politics.

The president was asked about Mike Huckabee’s assertion yesterday that the nuclear deal currently under consideration with Iran would “take the Israelis and march them to the door of the oven.”

“The particular comments of Mr. Huckabee are just part of a general pattern we’ve seen that would be considered ridiculous if it weren’t so sad. We’ve had a sitting senator call John Kerry Pontius Pilate. We’ve had a sitting senator, who also happens to be running for president, suggest that I’m the leading state sponsor of terrorism. These are leaders in the Republican Party.”

Obama later said the comments by Huckabee might be an attempt at getting some attention for his languishing presidential campaign: “Maybe this is just an effort to push Mr. Trump out of the headlines.”

The president summed up the current political environment like this:

“The Republican Party is shocked, and yet that arises out of a culture where those kinds of outrageous attacks have become far too commonplace and get circulated nonstop through the Internet and talk radio and news outlets. And I recognize that when outrageous statements are made about me, a lot of the same people who were outraged when it’s made about Mr. McCain were pretty quiet.”