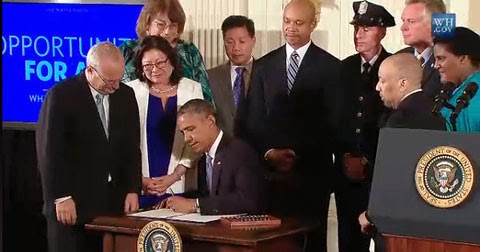 This morning, President Obama signed an executive order banning discrimination in the workplace against LGBT employees of the federal government and federal contractors.

The executive order adds sexual orientation and gender identity to an existing executive order that already protects employees of federal contractors based on race, religion, color, sex or national origin.

The amended executive order is comprised of two components. The first makes it illegal to fire or harass employees of federal contractors based on sexual orientation or gender identity. That provision will not go into effect until next year.

The second component bans discrimination against transgender employees of the federal government. This becomes effective immediately.

“America’s federal contracts should not subsidize discrimination against the American people,” Obama said during remarks at the White House just before signing the order. “I’m going to do what I can with the authority I have to act.”

There are approximately 28 million employees of contractors who work with the federal government.