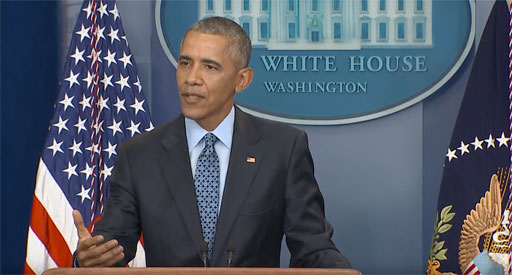 During his final press conference with the White House press corps, President Obama was asked by the Washington Blade’s Chris Johnson on how he looked back on his administration’s accomplishments on behalf of the LGBT community.

In his answer, he gave props to all those who came out and/or live out, and thereby make themselves visible to the world. He also points to the openness and authenticity of folks like Ellen DeGeneres.

I could not be prouder of the transformation that’s taken place in our society just in the last decade. And I’ve said before I think we made some useful contributions to it, but the primary heroes in this stage of our growth as a democracy and a society are all the individual activists and sons and daughters and couples who courageously said this is who I am and I’m proud of it. That opened people’s minds and opened their hearts and eventually laws caught up. But I don’t think any of that would have happened without the activism, in some cases loud and noisy, but in some cases just quiet and very personal.

And I think that what we did as an administration was to help the society to move in a better direction, but to do so in a way that didn’t create an enormous backlash and was systematic and respectful of the fact that in some cases these issues were controversial. I think that the way we handled, for example ‘Don’t Ask, Don’t Tell,’ being methodical about it, working with the Joint Chiefs, making sure that we showed this would not have an impact on the effectiveness of the greatest military on earth. And then to have Defense Secretary Bob Gates, Chairman Mike Mullen and Joint Chiefs who were open to evidence and ultimately worked with me to do the right thing–I am proud of that, but again, none of that would have happened without this incredible transformation that was happening in society.

You know when I gave Ellen the Presidential Medal of Freedom, I meant what I said, somebody that kind and likeable projecting into living rooms around the country, you know, that changed attitudes. And that wasn’t easy to do for her–and that’s just one small example of what was happening in communities all across the country, so I’m proud that in certain places we maybe provided a good block down-field to help the movement advance.

I don’t think it is something that will be reversible because American society has changed–the attitudes of young people in particular have changed. That doesn’t mean there aren’t going to be some fights that are important–legal issues, issues surrounding transgender persons. There are still going to be some battles that need to take place. But if you talk to young people, Malia and Sasha’s generation, even if they’re Republicans, even if they’re conservative, many of them would tell you “I don’t understand how you would discriminate against somebody because of sexual orientation. That’s just sort of burned into them in pretty powerful ways.

Listen to his answer below: