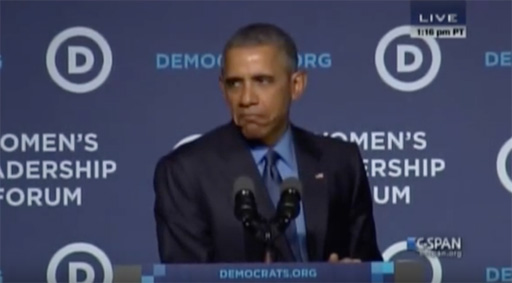 Speaking at the Women’s Leadership Forum yesterday, President Obama playfully wondered aloud at the GOP’s “gloomy” outlook on just about everything, comparing them to Grumpy Cat, complete with making the Grumpy Cat face.

The crowd was thrilled.

On a serious note, I have to say, when the GOP constantly says how “everything” is worse since Obama became president I come to the same list of issues where the country has improved: stock market more than doubled, unemployed down from over 9% to 5.1%, US car industry back from the brink of extinction, real estate market has improved dramatically, Osama bin Laden killed, health insurance premiums have stopped sky-rocketing, gay and lesbian couples can marry the person they love…

Who looks at that list and says “things are worse???”