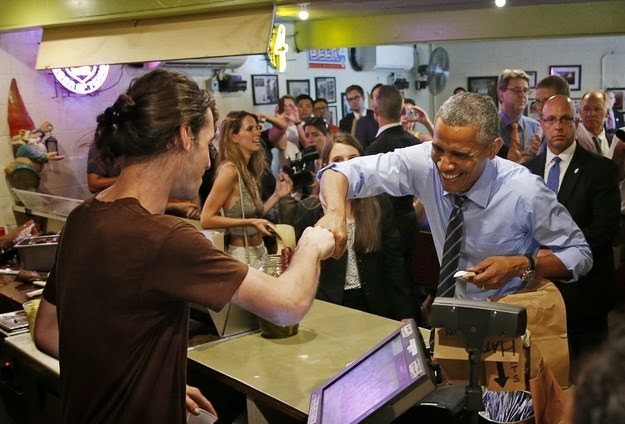 Working at Franklin Barbecue, Webb and co-workers kept hearing rumors that the President might be stopping by the restaurant.  Now, who really believes stuff like that?

Until – the President of the United States walks in.

Here’s how it went down via Buzzfeed:

“[They] frisked everybody, which was kind of my favorite part,” Webb recalled in an interview with BuzzFeed Saturday night. “Then he just showed up.”

Webb, who is also a comedian and retired musician, wasn’t about to miss his opportunity to say whatever he wanted to a sitting president. So, after he had introduced himself and the president was signing a reportedly $300 bill, he slammed his hand on the counter.

Obama reacted without missing a beat. “Are you gay?”

Taken aback by the directness of the question, he said, Webb responded, “Only when I’m having sex!”

The president laughed, then, realizing there was a group of children near the two, said, “Not in front of the kids!”

The two men bumped fists and that was that.

Afterwards, Webb had this to say: “As a comedian, it was cool to have a moment where I was making a sitting president laugh — over something that might be considered inappropriate is a bonus.”